Having trouble getting your newborn baby to sleep in a bassinet? Here are 6 expert tips that you can use today and give your tired arms a break!
The products mentioned on this page were independently selected by Babycious editors. As an Amazon Associate, Babycious may earn a commission from qualifying purchases

If you’re a (tired) new mom or dad, you may be wondering how to get your newborn to sleep in a bassinet instead of your arms.

It can be tricky, especially if your baby is already used to sleeping in your arms, as newborns often like to feel close to their parents. However, with a little bit of patience and some tips from experts, you can get your newborn sleeping soundly in their bassinet.

In this blog post, we will discuss some of the best ways to do this. Keep reading for more information!

Why it’s important for newborns to sleep in a bassinet

You may be tempted to think that letting your baby sleep in your arms is okay, and we couldn’t blame you! Who would say no to those cuddly moments with your newborn? However, it is actually not the safest sleeping arrangement for a newborn. If you’re tired and fall asleep with your baby in your arms, they could be at increased risk of injury.

So, let’s talk about why it is so important that newborns sleep in a bassinet. According to the American Academy of Pediatrics (AAP), infants should never be placed on their stomach or side when sleeping. This position can increase the risk for sudden infant death syndrome (SIDS). Instead, all babies under one year old should be placed on their back to sleep on a firm and flat surface.

All babies under one year old should be placed on their back to sleep on a firm and flat surface.

Why won’t my baby sleep in the bassinet?!!

Now that we went over how important it is to put your baby to sleep in the bassinet, you may be wondering how to get your newborn to sleep in a bassinet. How can you convince them that this is their new sleeping arrangement?

If you’re having difficulty getting your newborn to sleep in her dedicated bassinet, know that you are not alone! You will have to make some adjustments for your little one, but it is possible.

First, it’s important to understand how infants sleep and why they might prefer certain positions over others. According to the National Sleep Foundation, babies’ brains are still developing during their first year of life. They don’t yet have the ability to self-soothe or know when it’s time for bed like adults do (how many times have we wished that were true!). So, if a baby is used to being held while they fall asleep but then placed in their crib alone at night as soon as they’re out cold – chances are pretty good that they’ll wake up again! This means: if you want your baby to sleep in their bassinet, they need to fall asleep in the bassinet.

If you want your baby to sleep in their bassinet, they need to fall asleep in the bassinet.

It’s also important to know that newborns make no difference between night and day, so don’t fret if your baby doesn’t sleep through the night in the first months of life. You can help your newborn establish their circadian rhythm by making sure they get plenty of sun or daylight during the day and making the room they sleep in during the nights and the naps as dark as possible. This will help them begin to associate darkness with sleeping and daylight with being awake and active.

Experts recommend new parents to start early on putting their newborns to sleep in the bassinet. For some babies, it will happen naturally: your baby is exhausted and falls asleep in her bassinet with no problem, so you don’t need to move her over to their bassinet or co-sleeper after they’re out cold (ideally before midnight). For others, though – this might mean working through a bit of fussiness (and/or crying) at first while getting used to the new sleeping arrangement.

How long will it take? That depends entirely on your little one’s personality! Also, things like colic can make things harder for babies who need constant motion throughout most nights until they fall asleep (which could last weeks!). But we promise there’s light at the end of the tunnel!

Here are 6 tips that experts recommend to help get newborns to sleep in their bassinets that you can start implementing starting now and see improvement in the quality of your baby’s sleep (and yours!):

Tip #1: Use the bassinet for naps

Start by using the bassinet for naps during the day rather than at night. This will get your baby used to sleeping in it and make the transition easier when you eventually move them over to nighttime sleep. The naps are the best to start with since your baby is only going to sleep for a short amount of time, and you are generally less tired than you are at night.

Getting your newborn to nap in their bassinet is a small win that paves the way for nighttime sleep.

Set a consistent sleep routine and stick to it. You should try as much as you can to put your baby in their bassinet at the same time every night and also at the same times for their daytime naps.

Establish a pre-sleeping routine for your baby for night time sleeping, where you try to get him as calm and relaxed as possible. This routine may include a warm bath, putting on pajamas, reading them a story, singing a lullaby, dimming the lights, etc.

Tip #4: Put your baby in the bassinet drowsy but awake

Tip #5: Make sure the bassinet is comfortable

Make sure that the bassinet is comfortable for your baby, with a mattress that is firm enough but not too hard on their backs and just thick enough to offer good support. Avoid getting a bassinet mattress that is too soft or too thick as this could pose a risk of suffocation.

The same goes for blankets, pillows, soft bedding, or toys. The bassinet should be clear of any object that could interfere with your baby’s breathing during their sleep.

Tip #6: White noise is your friend

Use a white noise machine to help soothe your baby to sleep. White noise is similar to the sounds your baby used to hear when they were in the womb. This creates a familiar environment for your baby and will (hopefully) help them fall asleep faster.

If you’re still having trouble getting your newborn to sleep in their bassinet, ask your pediatrician for advice. They will make sure that your baby doesn’t have any issues like reflux, colic, or feeding intolerance that may interfere with their sleeping. They may also have some tips that will work specifically for your baby. But we have to warn you that there is no magic spell to make your newborn sleep in their bassinet.

Getting your baby to sleep in their bassinet will take some time and dedication on your part. But with a little bit of patience and these helpful tips, you can get your newborn to sleep soundly in their bassinet! By following the guidelines from the AAP and using some tricks from experts, you’ll be able to create a safe and comfortable sleeping environment for them – without sacrificing any of those precious cuddles.

If you have applied some or all of these tips, tell us how it went in the comments down below. And reach out to us if you have any more questions.

The purpose of this article is informative and educational only. It’s not a substitute for medical consultation or medical care. We do not accept any responsibility for any liability, loss or risk, personal or otherwise, incurred as a consequence, directly or indirectly, from any information or advice contained here. Babycious may earn compensation from affiliate links in this content. 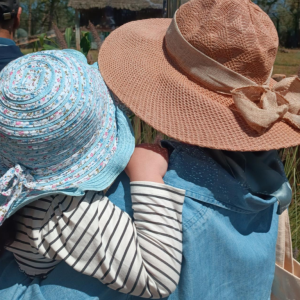 Salma is a mom of a two years-old and your host at babycious. Salma developed a passion for conscious parenting and lifestyle after entering motherhood and experiencing firsthand the joys of breastfeeding. She is an engineer by trade, which helps her bring a scientific and no-nonsense approach to every subject she tackles.

How to Dress Baby for Sleep in Air Conditioning?

How Much Do Baby Clothes and Diapers Weigh?

5 Reasons Why Babies Wear Onesies Under Everything

Does Nursery Furniture Have to Match? 5 Tips for Mixing and Matching

No spam, notifications only about new blog posts, updates.

Menu
PrevPreviousHow Long Can Baby Sleep in a Bassinet? 3 Signs to Make the Move
NextThe 5 Best Portable Bassinets for Families on-the-GoNext
On Key

Cloth Diapering 101 – All You Need to Know

Considering cloth diapering? Read this guide to get started on the right track.

How Much Do Baby Clothes and Diapers Weigh?

Wondering how much those adorable baby clothes and diapers actually weigh? Wonder no more! This guide breaks it all down for you.

Having trouble getting your newborn baby to sleep in a bassinet? Here are 6 expert tips that you can use today and give your tired arms a break!

If you’re looking for the best double bassinet for twins, look no further! We’ve put together a list of the 3 best available options on the market.